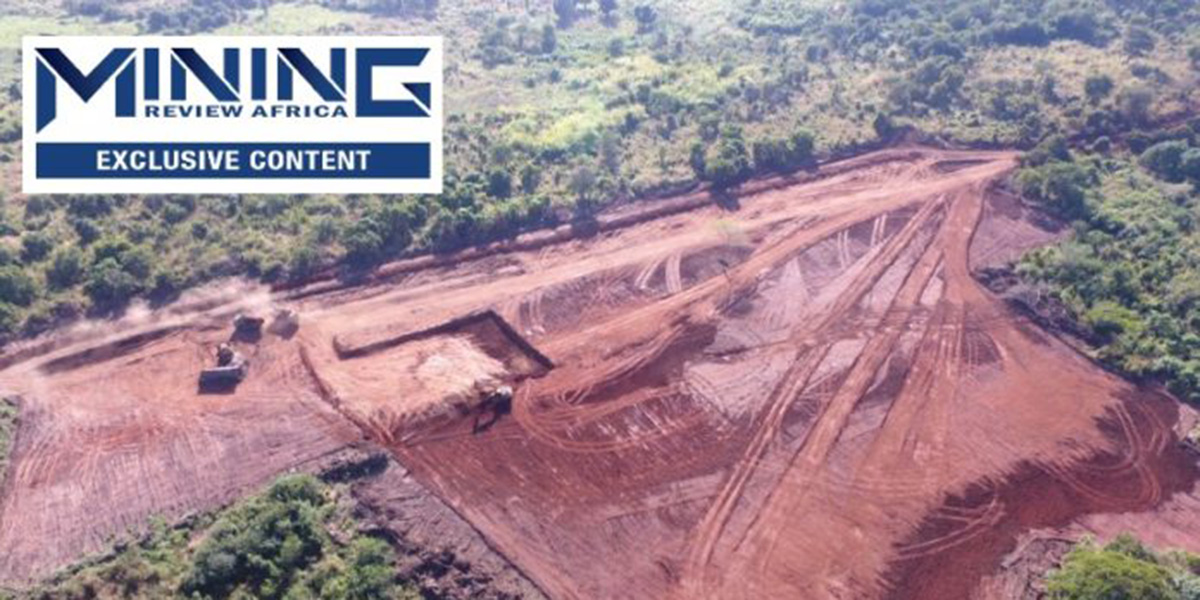 The construction of the Lindi Jumbo graphite mine in Tanzania is a true testament of ASX-listed Walkabout Resources’ resilience and commitment to developing its project – especially when many other companies turned their backs on developing projects in the East African country.

Located in south-eastern Tanzania, Lindi Jumbo hosts some of the world’s highest grade, coarse flake graphite deposits. Walkabout Resources took the project from discovery in 2015 to the completion of a definitive feasibility study (DFS) within 16 months and has been granted a mining lease over the deposit.In 2018, the company announced a mineral resource of 41.8 Mt at an estimated grade of 10.8 % Total Graphitic Carbon (TGC). The measured, indicated and inferred mineral resource contains a super high-grade core of 5Mt at 22.5% TGC for 1.1 Mt of contained graphite, making this the highest grade reported ore reserve within Africa.

In 2019, the company announced an updated DFS based on annual production of 40 000 t of graphite concentrate with a high-grade feed to the plant at an average of 230 000 tpa over a 24-year life of mine.
Cunningham explains that apart from its high ore reserve grade, what sets Lindi Jumbo apart from other graphite miners is the size of its graphite flakes in final concentrate.

“The larger the flake size, the higher the price it will fetch. Almost 75% of the graphite in final concentrate is above 180 microns. And while we still supply smaller graphite flakes to traditional sectors including the battery market, our focus will be on supplying large flakes to those parts of the world where we have off-take agreements,” he explains.

Realising its immense potential, in 2019 Walkabout Resources commenced an early start on the mine. The company spent US$2 million preparing the ground works, including clearing the area for the tailings storage facility and the plant as well as to secure long-lead items through its EPC contractor in China. Following this, Cunningham explains, the company embarked on a campaign to raise funds for further development of the project. To that end, Walkabout Resources secured a $20 million debt funding facility from CRDB Bank of Tanzania in May this year, and together with $12 million in companion equity funds, the company is funded right up until the start of production at the mine.

Walkabout Resources is aiming to start production at Lindi Jumbo in Q3, 2022 and despite the challenges brought about by the COVID-19 pandemic, development of the mine is progressing to schedule.

Already the company has appointed a local contractor to undertake the earthmoving and civil works on site. “Currently, the contractor is putting all the civils in place so that once the plant arrives from China it can be installed. We have also made an initial payment to our EPC contractor (Yantai Jinpeng Mining Machinery Co. LTD)  so that they can now finish the equipment that we purchased two years ago. We expect the first shipment of the plant to arrive in Tanzania in December,” explains Cunningham.

Furthermore, with travel restrictions in place in China, Walkabout Resources has appointed Axis Group International in Beijing who is working with the EPC contractor to ensure the plant is delivered on schedule and for quality control purposes. Cunningham adds that the company intends to outsource the services it requires to local contractors. To that end, the company is looking to  sign agreements with a logistics company as well as a company that will build and operate the mine camp.

Lindi Jumbo will be an open cast mine with the feed to the plant expected to be around 650 tpd. The operation comprises a crushing and grinding circuit that includes various stages of flotation and attrition after which the graphite is dried, screened and bagged. While the current plan is to produce 40 000 tpa of graphite concentrate, the company is considering the option to increase production should there be more demand for the product.

“We have also designed the plant to preserve the flake size throughout this process in order to ensure that our product sells for a higher price,” Cunningham adds.

Currently, Walkabout Resources has signed off-take agreements with graphite end-users in China. At the same time, however, it is also looking to supply markets in Europe and USA.

“We have signed a memorandum of understanding with a company in Germany and once we are closer to production, we hope to sign an off-take agreement with the company,” states Cunningham.

Power to the mine will be supplied by diesel powered generators – this will account for around 25% of the total operating costs. It is for this reason that the company is exploring the option of a hybrid power system that comprises diesel, solar and batteries.

Commitment to Tanzania pays off

With a high-grade product and favourable market conditions, Lindi Jumbo has all the makings of a successful operation. However, the mine holds greater significance in the Tanzanian mining sphere.

The construction of the mine is the first serious attempt of developing a project since the introduction of the contentious 2017 Mining Act Amendments in the country. The legislation was a major blow for Tanzanian miners as international investors were dissuaded from investing in projects in the country. And while many mining companies pulled out of the country, Walkabout Resources continued to develop Lindi Jumbo while adhering to the new regulations.

Now, since the appointment of President Samia Suluhu Hassan in March this year, there has been a concerted effort on behalf of the government to create a more investor-friendly environment and to engage with international mining companies to expedite projects in Tanzania.
“We didn’t retrench any of our staff and just kept on going because we knew that at some stage, there would be renewed interest in the country’s mining sector. And while we started much later than some of our peers, the work that we did over the past few years has ensured that we are now ahead of them,” adds Cunningham.

Lindi Jumbo will also benefit local communities and create much needed employment opportunities. Walkabout Resources has already committed to prioritise giving jobs to individuals from nearby villages and is confident that eventually 99% of the staff employed at the mine will be Tanzanian.
Furthermore, the company has set up a trust that comprises nearby villages that will have 5% ownership of the mine.

“Dividends payable will go into the trust that money can then be distributed to the various communities who can use the funds to invest in social projects that are required,” states Cunningham.
The development of Lindi Jumbo has already received support from the top echelons of the Tanzanian government.

“Everyone is keeping a close eye on us but we are happy with our performance to date and are confident that we will bring the mine into production in 2022, concludes Cunningham.