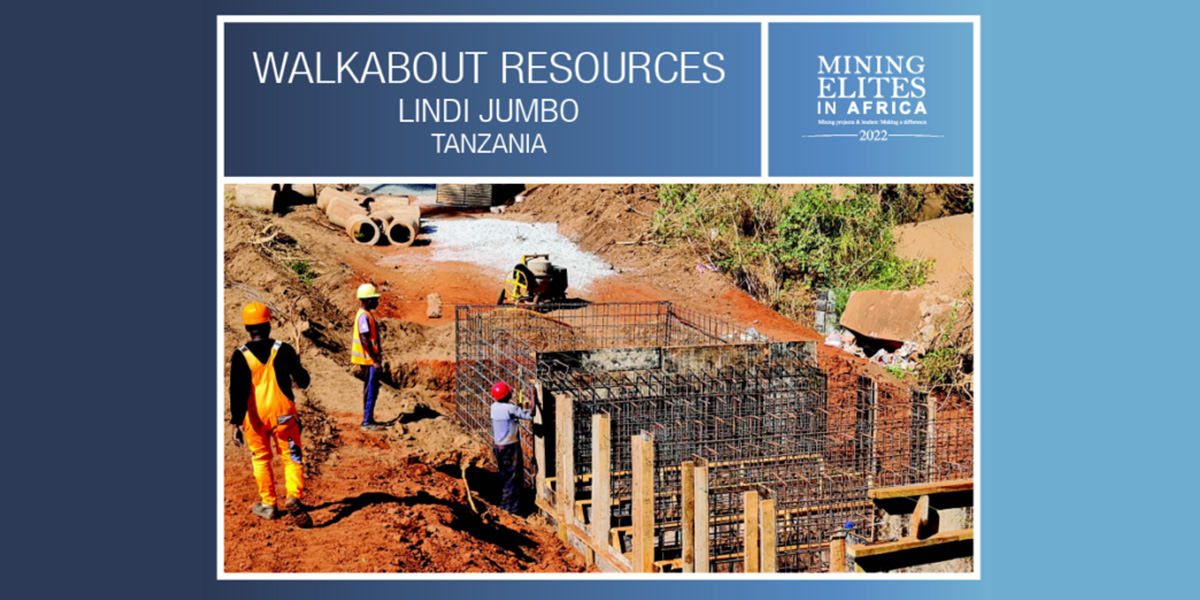 Australia’s Walkabout Resources started work on its Lindi Jumbo graphite project in south-east Tanzania in 2015, making the discovery which is the foundation of the project in the same year.

Today, roughly, six years later, it is on the brink of bringing the deposit to account with first production expected in the second quarter of 2022.

Walkabout has been ready to move to mine development at Lindi Jumbo at least since 2019, when it published an updated DFS on the project which demonstrated what the company called its “compelling economics”.

The problem was to fund the project, a task did not make any easier by the much-publicised tax dispute in 2017 between the country’s biggest gold miner, Acacia Mining, and the government of then President John Magufuli, which dented Tanzania’s reputation as an investor-friendly mining jurisdiction.

Walkabout persevered, however, and in April 2021 was able to announce that it had secured a US$20 million debt funding facility from CRDB, the largest, wholly owned private bank in Tanzania.

With this under its belt, Walkabout has been able to make substantial progress over the past several months, with a key milestone being the recent appointment of Tanzanian company TNR Engineering as the bulk earthworks and civil engineering contractor.

The scope of TNR’s work includes all the earthworks, concrete works and building in preparation for the construction and installation of the modular processing plant, which is being supplied by Jinpeng Engineering of China, Walkabout’s EPC partner on the project. Jinpeng, which is also a shareholder in Walkabout, will ship the plant to Tanzania in approximately 90 containers.

Although it is not a big project, Lindi Jumbo will mine a deposit which is said to have the highest-grade graphite reserve of any undeveloped graphite project in Africa. The mineral resource totals 41.8 Mt at 11% total graphitic carbon (TGC) while the ore reserve amounts to 5.5 Mt at 17.9% TGC (which translates into 987 000 t of contained graphite).

Mining the ore body, which outcrops at surface, will be carried out using standard open pit techniques. The strip ratio is low and the volumes to be moved modest, so only a small mining fleet is required.

Processing is similarly straightforward, incorporating simple crushing, grinding and flotation facilities which can all be easily expanded if required.

According to the updated DFS, the plant will incorporate ‘off the shelf’ mills, scrubbers, float cells, water, and slurry pumps with even the drying and bagging sections being delivered complete and in one package.

The project has an upfront capex of just $27.8 million – which will be paid back in less than two years – and will produce 40 000 tpa of four discrete graphite in concentrate products, with binding offtakes in place for 100% of the planned annual production.

A high basket price of the graphite concentrate is expected, due to the superior large flake production.

In many ways, Lindi Jumbo is a classic junior project, exemplifying the value that small exploration companies, with limited resources but plenty of energy and ingenuity, bring to the African mining scene.

It is, moreover, the first of several graphite projects in Tanzania that could see the country, whose mining sector is mainly based on gold and diamonds, emerging as a significant global producer of graphite.